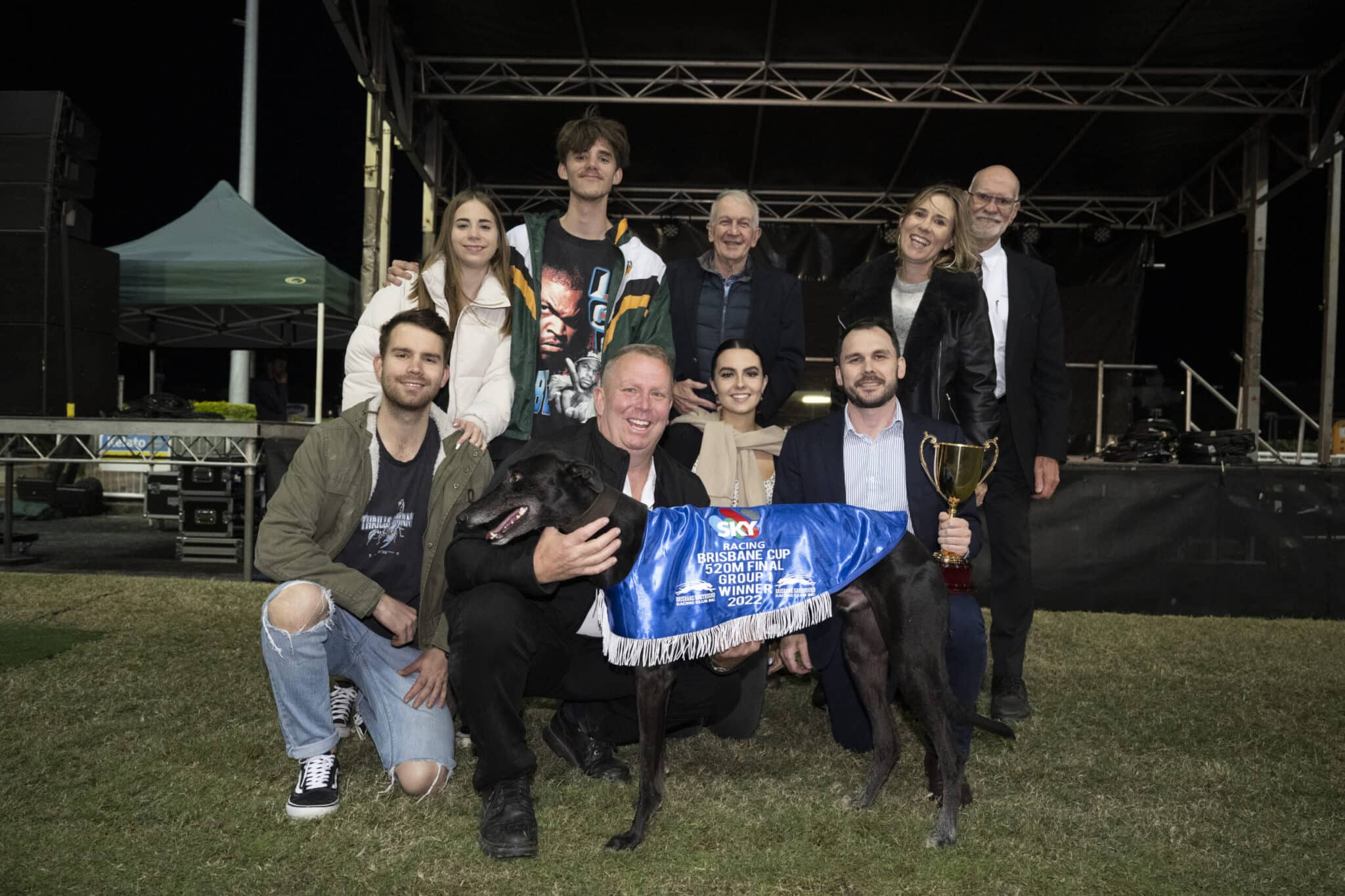 Deep within the kennel block at Albion Park on Group 1 night, master trainer Tony Brett, would not have heard The Angels Tribute Show belt out the Aussie rock anthem, Am I Ever Gonna See Your Face Again.

It was eerily prophetic.

Not long after, with the band making way for a presentation dais, Brett told the still-boisterous crowd, that, on the night he was celebrating his best-ever week in greyhound racing, he was stepping aside.

OK, T. Brett will not disappear from greyhound racing, but his large team at Grandchester, near Ipswich, will reduce to as few as one or two.

Brett isn’t sure of the devil in the detail, but he knows that the timing is right to truly enjoy the success that 20 Group One victories can deliver.

And that means giving back to his wife, and ‘his rock’, Fleur.

“When we got married I promised Fleur that I would take her to Paris for her 40th birthday,” Brett said. “She is 47 this year and we still haven’t been there.

“It is time to repay. She has been my rock all the way through. It is time to enjoy ourselves for a little bit.

“I will always train dogs and whether I get back into it up to this stage, I don’t know. I will just see what we’re doing and how much we’re doing. Now, we have the freedom to make those choices.

“You dream of things like tonight and it is a dream to go out that way.”

And what an amazing dream run Brett and his team have had through the TAB Queensland Winter Greyhound Carnival.

The undercard – the $225,000 Group 1 TAB Queensland Cup (710m) – was also the Brett show, with the Queenslander being the stand-in trainer for both winner Collinda Patty (Victoria’s Jason Thompson) and the second-placed, South Australian-based Bedrock Fred. Third in the distance race was Days Of Thunder (Warren Nicholls).

As well as winning both Group 1 features, Brett has also landed the Dashing Corsair and Super Stayers with Bedrock Fred, as well as the Super Sprinters with Equalizer (also for Jason Thompson).

Although admitting to being speechless behind the boxes when Orchestrate saluted, Brett found his voice on the victory dais to not only announce his plan to drastically down-size, but to also thank those who have been his support.

Front of mind, the deeply religious Brett, acknowledged his faith.

“Everyone has a destiny and I just thank God that he led me to do what I love to do,” he said. “And to have given me the dogs, the people around me and the ability to train these dogs for the last 25 years.”

Close to tears, Brett also sent a ‘heavenly hug’ to his parents, Dave and Jenny.

“My mum and dad, they have both passed away,” he said. “Little did he know that 45 years ago when he bought a greyhound home in Mackay and I was five years old that here we are all these years later and we have just won the richest race in Queensland and just accomplished what is probably my greatest week in greyhound racing in my life.”

Brett went on to thank his family, the members of the Brett team, his many owners across the years and the crowds of people who come to greyhound meetings.

It was all genuine, heart-felt, and Brett also shared that, although he has tasted plenty of success, like everyone in the greyhound industry, he is not immune to adversity.

He turned and acknowledged two people standing towards the back of the presentation throng – Brisbane club president Les Bein and long-term club committeeman Bob Lambert.

“Back then I was 30 and I had to stand on my own two feet and those two guys were there.

“Again, at the end of last year we had rough times, but everyone goes through that. You just have to keep focused and keep doing what you’re doing.

“Some people start looking for problems that aren’t there. Things will start to turn and they always do.

“People say: ‘You have had the good dogs’.  When dad passed away I didn’t. We started from scratch. And here we are 20 years later and you have nights like these. It has been a long haul.

“That is why it is so satisfying.

“Tonight is such a big reward. All the sacrifices, well they just go out the window in 30 seconds.

“It is an amazing feeling to train a group winner.

“You love any winner, but there is something special when the pressure is on and everyone is watching and it is so much fun and I just love it … really love it.”

Facebook-f
PrevPreviousNed hopes ‘Stan’ can stand and deliver in Group 1
NextWhite Wonder ready to take on the bestNext
Chase News Subscribe (it's free!)
Scroll to Top